Sio stands
De Sio stands are designed by Rokus van Blokland. He designed stands for expositions in the Netherlands and for the annual Toy Fair in Nuremburg. The first dates from 1959 when the Toy Fair was still in the centre of Nuremberg at the Wieselerhaus.
During the 60s the Toy Fair expanded and was situated at the new and large Messe area in Nuremberg. 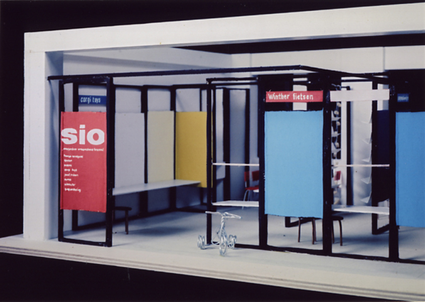 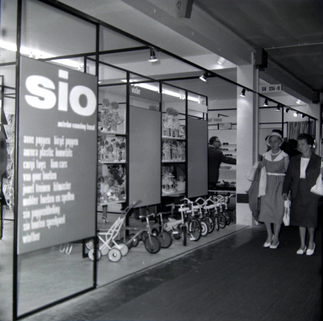 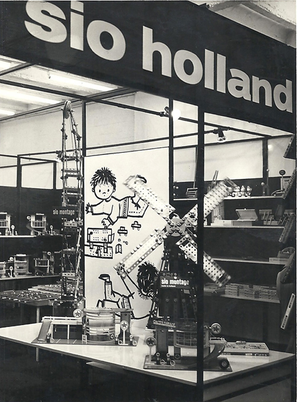 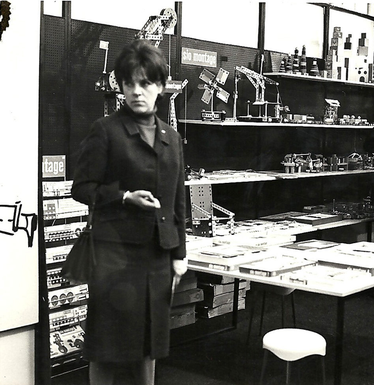 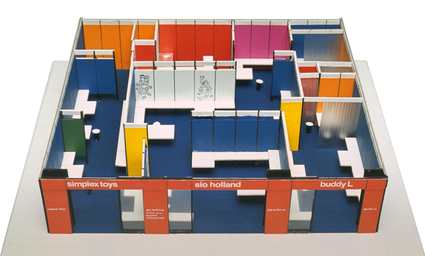 1972 Maquette Sio stand Nuremberg
The stand of 1972 had to accommodate three names/companies which cooperated with Sio at that time; Simplex toys, Sio holland and Buddy L.
The design gave all three a private entrance, meeting room and cloakroom. In addition there was a joint bar.

The stand was build on a grid of 80 cm. Using construction system 'Abstracta' the walls were built with display shelves and tables in the background coloured textile walls and enlarged drawings made by Corry. 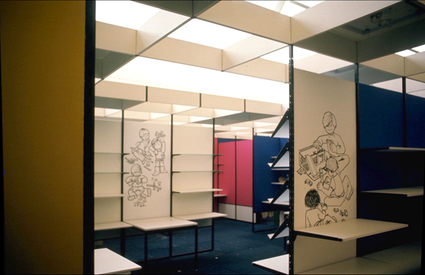 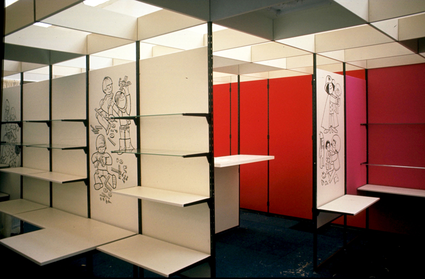 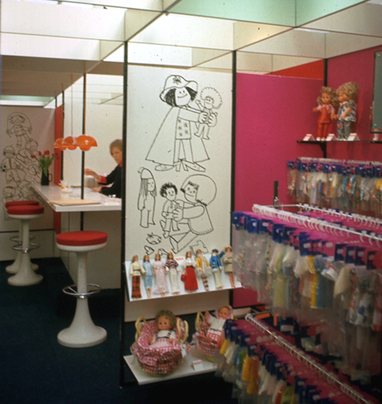 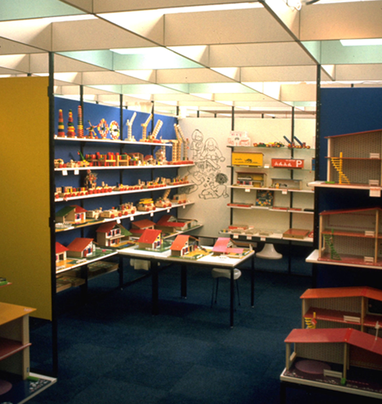 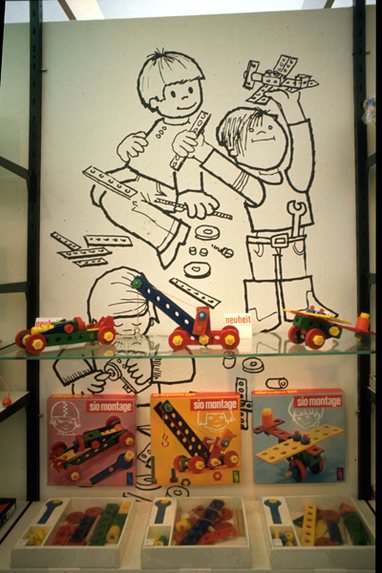 Drawings by Corry at the different groups of products. 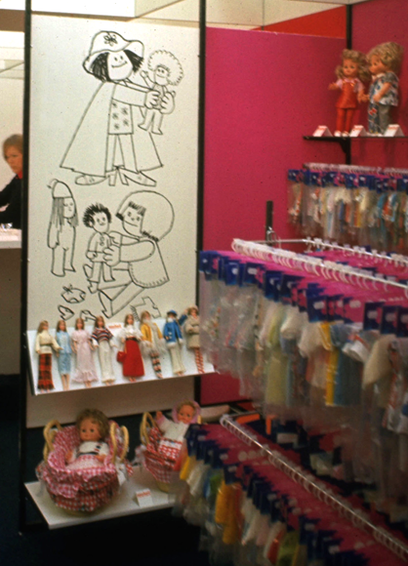 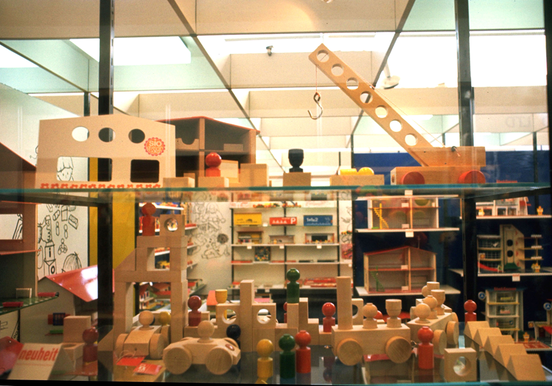 In the showcase are the new designs, the 'Neuheiten' of that year.

Nuremburg
For years Rokus and Corry travel around february to Nuremberg to the annual International Toy Fair. The fair closes every time a busy period in which the new designs are made for the coming year. Every visit the city and the exhibition are great sources of inspiration for Rokus and Corry. 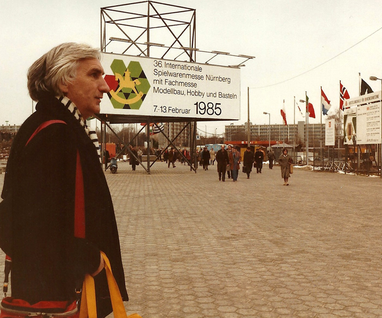 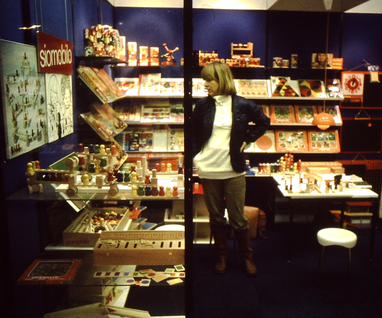 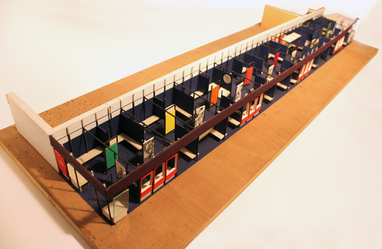 1981 Sio stand Jaarbeurs Utrecht
In the Jaarbeurs in Utrecht, the stands of manufacturers were arranged together by the sort of product. Here buyers/retailers could see the products throughout the year and order them.

Sio had a large stand over the entire length of a hallway. The stand was therefore long and narrow. Rokus made a design similar to the Nuremberg stand in 1972, also with a building system in a grid of 1 meter. Aside to the exhibited products background planes were placed in spectral colours, interspersed with large drawings of Corry and large photos of toys and playing children. 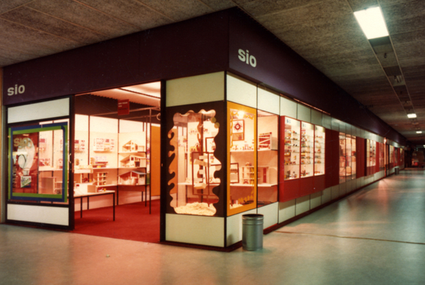 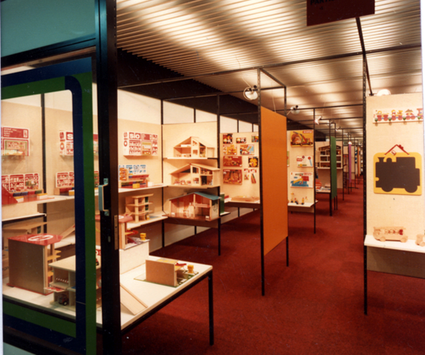 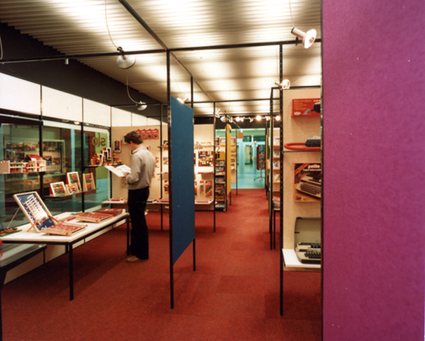 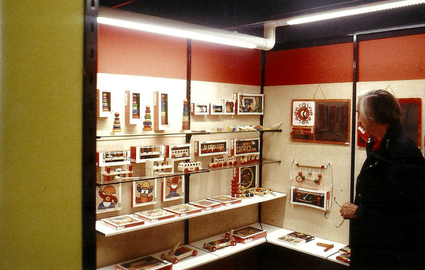