Boardgames
The first game designs by Corry and Rokus are from the mid 50's. From that time they design board games, creative making games, lotto games and card games.
In some cases they design a new edition of an existing concept as goose and fleas game. Corry and Rokus styled for decades the Dutch edition of Scrabble, an american game licensed by Sio.

Most Sio games are entirely conceived and designed by Corry and Rokus; rules, design of boards and cover boxes, typography and all the drawings. Examples are Kom Mee Naar Buiten (Come Outside) and Huisje Boompje Beestje (Cottage Tree Animal).
They are always closely involved in the entire production from the printing to the box manufacturers, where they monitor everything in great detail. 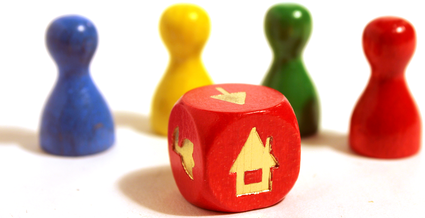